Anyone who ever has admired the perfection of a paint job on a classic car or the high-gloss sheen of a lacquered cabinet knows that it's tough to beat a sprayed-on finish. For years, spray finishing was done only by pros with expensive equipment and large spray booths to contain the dangerous fumes. Not so anymore. With the advent of HVLP (high-volume, low-pressure) sprayers and systems, perfect finishes are within anyone's reach.

Unlike conventional spray guns, HVLP systems use a large volume of air at a low pressure to apply the finish (typically less than 10 pounds per square inch compared with the 80 to 90 pounds used by conventional spray guns). Using lower pressure causes significantly less "bounce-back," or overspray, an unwanted side effect of high-pressure systems. This means that an HVLP system will direct the finish where you want iton the project.

There are two ways to achieve the benefits of HVLP spraying. One is to purchase a system that includes a turbine (to generate high-volume, low-pressure air), a spray gun and a hose. If you already have a compressor, the other option is to buy a conversion gun. A set of chambers, or baffles, inside the conversion gun changes the incoming high pressure to a lower pressure at higher volume. Note that a conversion gun needs a powerful compressor (at least 3 horsepower, with a minimum 20-gallon tank) to operate properly. You also will require a filter between the gun and the tank to remove any oil or water present in the line. To further reduce the risk of contamination, set aside an air hose to be used only for spraying.

When selecting an HVLP system, you will need to know the types of finishes you'll be spraying (now and in the future), as well as their viscosity. Finishes typically are grouped into three categories: thin (clear stains and sealers), thicker (thinned latex and oil-based paints), and thickest (unthinned latex and oil-based paints and fillers). The packaging should indicate which finishes a system or gun is capable of spraying. Because of the warm air generated by HVLP turbine systems, you will need to add more thinner and slower speed thinners (reducers) or retarders than you are accustomed to using with a conventional high pressure system to avoid "orange peel."

Each component - turbine, hose, and spray gun - plays a critical role in the overall performance which is why turbine HVLP sprayers are sold as a complete system rather than individual components. "Turbine" refers to the motor/fan assembly. The motor drives small, high-speed compression fans. HVLP turbine systems traditionally are rated by the number of fans - called stages - attached to the motor shaft. Single stage turbines have one fan; two-stage turbines have two fans, etc. The more stages, the higher the airflow and the higher the air pressure is at the spray gun. One and two-stage units are best for thin finishes. A three-stage turbine, however, can handle most stains, varnishes and water-based finishes, although latex will have to be thinned. 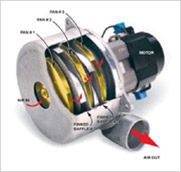 HVLP guns have larger passageways than high-pressure guns to accommodate the higher volume of air moving through the gun under lower pressure. Unlike high-pressure guns that use a fan-pattern knob to adjust spray, the spray pattern of HVLP guns is adjusted by moving the air cap in and out. 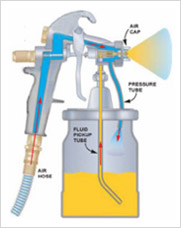 All HVLP turbine paint cups are pressurized by the air flowing into the gun, through the air tube fitting and the air pressure tube which enters the lid of the paint cup. This enables the fluid to be siphoned through the fluid pickup tube into the spray gun. HVLP paint spray systems can be used in a wide variety of painting applications. The finer atomization of HVLP systems produce smoother surface finishes. There are many paint gun models, with a variety of tip sizes to accommodate most coatings, including solvent-based paints, water based coatings, fine finish metallic coatings, high-solids polyurethane, contact adhesives, varnish, top coats, lacquer, enamel primer, latex primer, epoxy, and vinyl fluids. The manufacturers guidance should be followed in all maintenance and operating aspects, particularly when spraying high solids paints. Clogging problems can hamper painting operations if the technician is not familiar with the equipment or the application techniques required. The efficiency of this system is reduced if painting is in exposed areas

The higher transfer efficiency achieved by the HVLP paint spray system reduces the total volume of paint that is used, which in turn results in the following benefits: